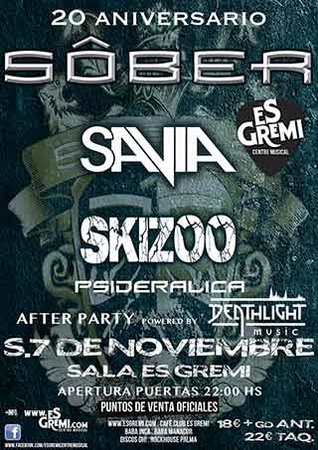 Sober 20th anniversary
Sôber held throughout 2015 20th anniversary tour and celbramos in Palma de Mallorca in the room is Gremi
A show of more than 3 hours, where we can see the whole history of the band, presented in a documentary format live ever seen in this country.
All the race of the three founding members will be reviewed, including songs from their highly successful side projects ... sap harvested SKIZOO, with members of both formations that give weight and credence to the tour.
Sober 20th anniversary, one of the most important events of 2015 rock.
Advance: € 5 + GD, office 8 €